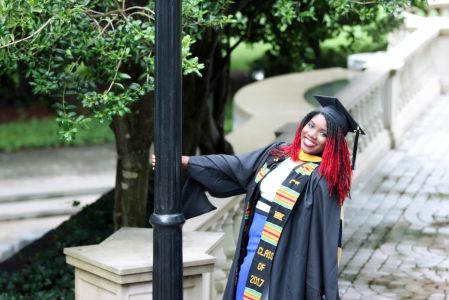 1. Most students will not be accepted to medical school on their first attempt, so the growth year story is the actually the story of the majority.

2. I consider myself a very hopeful person, and I’m definitely hopeful when it comes to encouraging prehealth students that despite challenges or setbacks, God will work things out for them.  I spend a large part of my time doing that.

3.  It helps to have a couple witnesses that can testify that the encouragement I give isn’t bogus lol. So if a recent graduate who students saw, remember, and maybe even knew has a growth year story, it helps them to see that if God did it for so and so, He’ll do it for them as well.

I’m excited to share the growth year story of Ashlea!  Ashlea is completing her first year of medical school. I am excited for her journey thus far and the journey ahead.

HealthOU: When did you graduate from Oakwood?

HealthOU: Did you apply to medical school while you were at Oakwood? What factors do you think contributed to not being accepted that first go around?

HealthOU: What did you do differently when you reapplied?

HealthOU: When did you take the MCAT? How did you study?

HealthOU: What did you do differently the second time you took the MCAT?

[The second time around], I took the MCAT on June 2, 2016. I studied for the test by attending evening Princeton Review MCAT classes (offered by my graduate school), and then studying on my own using textbook and online resources (including completing MAAAAANY practice tests).

HealthOU: How long did you study the second time?

I’d say overall I studied for about 7 months (vs the 2-3 months I studied the first time). I tried to study at least 3 hours a day on top of studying for my graduate classes but that varied depending on how much work I had in my class/if a test was coming up. Some weeks I’d dedicate Sundays to studying only for the MCAT.

HealthOU: How did you juggle applying to medical school while you were in a master’s program? How did you find time to study for the MCAT, work on personal statement,  etc

HealthOU: Did you plan on taking a gap year prior to graduating?

HealthOU:Students often have a timeline in their heads and it can be discouraging to find yourself taking a gap year if you didn’t initially plan do.  Did you experience any of these feelings?

Ashlea is a Georgia-born and raised graduate of Oakwood University. She completed her Master of Science degree in Interdisciplinary Health Science at Drexel University in the spring of 2017.  Her hobbies include cooking, singing, writing, watching Korean dramas and painting. She is nearing the end of her first year at Loma Linda University School of Medicine.

This entry was posted on Friday, April 6th, 2018 at 3:45 am and is filed under Uncategorized. You can follow any responses to this entry through the RSS 2.0 feed. You can leave a response, or trackback from your own site.